Döner  is a Turkish dish made of meat cooked on a vertical rotisserie, normally lamb but also a mixture of veal or beef with these, or chicken.

The sliced meat of a doner kebab may be served wrapped in a flatbread such as lavash or pita or as a sandwich instead of being served on a plate. It is a common fast-food item not only in Turkey but also in the Middle East, Europe, Canada and Australia. Seasoned meat in the shape of an inverted cone is turned slowly against a vertical rotisserie, then sliced vertically into thin, crisp shavings and served various ways – e.g with rice, flat bread or chips and then with sides like onion, pickled cucumber, chilli, cheese, and yogurt based dressing.

Kebab (Shish Kebab) is a skewer with meat and vegetables and is usually grilled. It can contain lamb, beef, fish, or chicken, as well as vegetables like green peppers, onions and mushrooms. Especially in Adana (Turkey), you can find the most delicious Kebab.

Mantı. These delicious tiny treasures, Manti or Mantu, dumplings with spiced ground meat and onion, is one of the all time favorite  dishes in Turkey. In especially Anatolia, family members gather to prepare the dough and fill the tiny dough squares with the filling together; it is a bit of a labor of love, so it is great to get together for making it, and so worth the effort. The marriage of the melt-in-the-mouth dumplings with garlic yoghurt sauce and spice infused olive oil is simply irresistible. Tangy Sumac, red pepper flakes and dried mint infused in olive oil all add another layer of deliciousness and work greatly with garlic yoghurt as the sauce for manti.

Sarma / Dolma is a Mediterranean dish made with rice-stuffed grape leaves. Although the term dolma is a Turkish word, meaning something that is stuffed, most countries in the Mediterranean region have their own version of this dish. Occasionally dolma can be found premade in specialty stores but is more often found in Mediterranean restaurants or made at home.

In addition to grape leaves, rice, onions, and lemons are normally included in dolma. Tomato paste, pine nuts, and mint are added to many versions as well. Cinnamon, allspice, and oregano, as well as salt and pepper, may be used to season the dish. Some versions included fresh dill, dried currants, or parsley. Minced or ground meat, usually lamb or beef, are included in many dolma recipes.

To prepare dolma, the onions are sauteed in oil, then the rice is added and the mixture is covered in hot water. The rice is allowed to simmer for a short time, partially cooking it. Afterward, it is removed from the heat and the other ingredients, excluding the grape leaves, are mixed with the rice.

Köfte. If you visit Turkey, you’ll see köfte—balls of ground meat (or sometimes ground vegetables) seasoned with onion, herbs, and spices—everywhere. The recipes vary from region to region and town to town. Some köfte are made with bulgur, rice, or breadcrumbs; others are meat only, mostly lamb, but sometimes a combination of beef and lamb. They are served with flatbread, onions sprinkled with sumac, and yogurt.

Pide(pronounced pee-dE) is often described as Turkish pizza on menus and we guess that’s the nearest description. It’s a thin, oblong dough base, your chosen filling and then it’s folded over around the edges. You can usually watch the guy prepare the base, spinning it in the air and then sliding it into a stone oven. A few minutes later, your pide will be taken out of the oven, chopped into thin slices and served to you on a plate.

Lahmacun, also known as ‘Turkish pizza’, is a spicy Turkish/Middle Eastern dish consisting of a ground meat/vegetable mixture, spread on a very thin bread/cracker-like crust.
Although lahmacun may look somewhat similar to Italian pizza (and is referred to as Turkish pizza outside of Turkey), their tastes are completely different. Lahmacun is spicy, the dough is very thin, there is no cheese and it’s main ingredient is the ground meat. Lahmacun is especially famous in the Southern and Eastern parts of Turkey where it’s traditionally eaten with salad and lots of red hot pepper flakes! The latter is optional, if you are not into hot/spicy food, just leave it out. I myself have started appreciating spicy food just recently, yet enjoyed the more mellow, non-spicy lahmacun for years.

Poğaça is a salty delicious pastry. These delicious cheesy pogacas (poh-ah-cha) are a favorite breakfast or tea time treat in Turkey and we love them. Basically Turkish people eat them anywhere, anytime. They are easy to make at home; make your kitchen smell heavenly and they are very popular with children, as well as adults. Bakeries, street stalls sell freshly baked pogacas (plain, with white cheese, olives or with potato & cheese filling) in Turkey and with a glass of cay aside, they make a delicious and affordable breakfast or tea time treat. It is generally made from wheat flour, but barley and sometimes rye may be added. 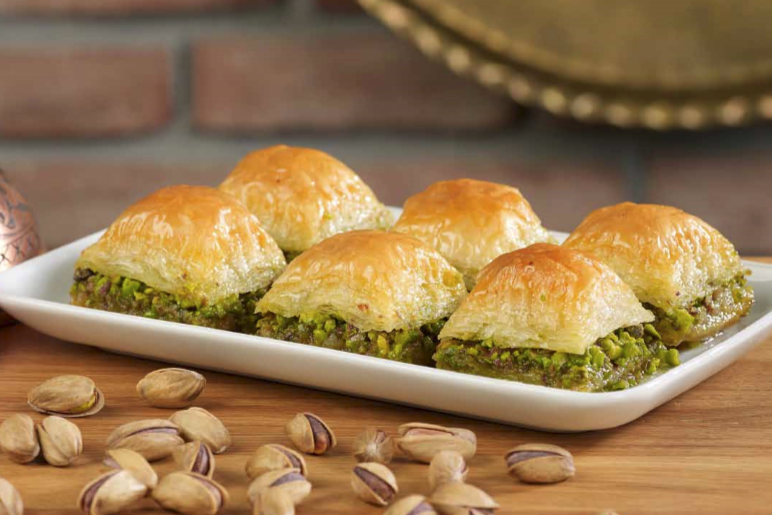 Baklava is a Mediterranean dessert made with Phyllo dough, nuts, butter, and sugar. After baking to perfection, a sweet syrup is immediately poured over the pieces allowing the syrup to be absorbed into the layers. Baklava has its origin in Gaziantep, Turkey.

Kurabiye is a Turkish delight. It is a cookie, particularly a sweet (originally middle eastern, now also turkish, greek and albanian) cookie, often made with almonds or hazelnuts. There are various types.

Künefe is considered to be one of the most delicious Turkish desserts, especially in the city of Antakya (Antioch) located on Mediterrenean Sea, in Southern Turkey. Although künefe shops are very common throughout Hatay, Kilis, Adana, Mersin and Gaziantep provinces, the city of Antakya in Hatay is known for the best künefe in Turkey. What distinguishes Antakya’s künefe from others is the daily made fresh, elastic cheese that is only made in Hatay region. The kadayıf (shredded phyllo dough) is also made from scratch at small künefe shops in almost every corner in Antakya which I find very entertaining to watch.

Maraş Dondurması. Many Turkish towns and cities are known for what they produce -Malatya for its apricots, Gaziantep for baklava, and Adana for its kebabs.  Kahramanmaraş is famous for its ice cream.In the summertime you can find Kahramanmaraş ice cream sold by vendors in the popular tourist destinations in Istanbul.  They perform and entertain as much as they sell dondurma.  Their job is to make the ice cream do the seemingly impossible – pull it like taffy, spin it around like a rope and then play tricks on the tourists with the sticky mass that doesn’t easily leave the spoon. This is ice cream unlike anything you have experienced. The traditional serving is plain ice cream with a sprinkling of powdered pistachio, served with a fork and knife, for it is not easily scooped with a spoon.  While it may sound unappetizing to eat such a hard, frozen mass it is in fact very smooth and melts like butter as soon as it hits the warmth of the tongue.  No need to greedily gulp down a cone of ice cream to prevent a sticky mess of melted syrup down your arm – Maras ice cream sits patiently in its cone, allowing  you to leisurely savor each creamy bit. The secret to Kahramanmaraş ice cream is the salep – or the dried, powdered root of an orchid that grows in Southern Turkey.  Salep is what gives this ice cream its incredible creamy flavor, and also these gravity-defying, melt-resistant qualities.